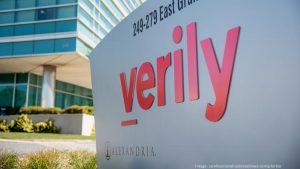 Deepak's resume reveals a deep interest in the automotive sector. With an eight-year stint at Ford and nine years at Tesla, where he was a central force in the 2010 initial public offering that took the Elon Musk company public. This could indicate Verily’s own plans to go public in the near future. Though, the company has publicly stated that it is Deepak’s extensive strategic and operational expertise that Verily is interested in utilizing.

"I am very excited to embark on this journey with the Verily team to support the vision of significantly reducing healthcare costs with a preventive approach. The healthcare industry, much like the transportation industry when I first joined Tesla, is on the cusp of a new wave of transformation,” Deepak said in a statement. “The combination of very diverse skill sets and vertical integration of innovative technologies puts Verily in a unique position to deliver on the shared goals of many: better, less expensive care for many people.”

Since becoming a subsidiary of Alphabet in 2015, Verily has raised over $1.8 billion in funding. The company has also recently partnered with a slew of healthcare companies and invested in new technology. Working with Dexcom, the company has been building a new sensor for tracking blood sugar for people with type 2 diabetes. While with ResMed, Verily is working on a project to help diagnose people with sleep apnea. The company also works with hospitals and health systems to help support the adoption of value-based care models.

This isn’t the company’s only new blood. A report from CNBC, notes that the new head of software will be Scott Burke, the former chief technology officer at consumer DNA company, Helix. The company has also hired former US Department of Health and Human Services national coordination of IT, Vindell Washington as the chief clinical officer of its platform business.