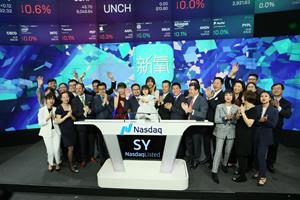 China-based cosmetic and aesthetic surgery information services site So-Young International has experienced multiple days of share growth following its U.S. public listing. In its IPO last week, the company raised $179.4 million through sales of 13 million American Depositary Shares priced at $13.80 each. Nasdaq trading began on May 2, with shares climbing a further 14 percent on Friday to end the day at $20.77.

In its own words, So-Young is “the most popular online destination for discovering, evaluating and reserving medical aesthetic services in China.” The Beijing-based company was founded in 2013 to connect potential plastic surgery clients with practitioners via its mobile medical aesthetic platform. In 2018 alone, the service helped to facilitate $306.6 million in transactions. Indeed, 2018 was a record-breaking year for the company; revenue increased 138 percent with $8 million in profit.

A key feature of So-Young’s platform is its comprehensiveness. Users can locate medical providers for a wide range of cosmetic procedures with reviews of the providers’ quality and results plain to see. So-Young’s users are also able to schedule appointments directly through the app while also viewing original content and social features that help guide decisions further. As of last year, the service boasts approximately 1.4 million monthly users on average.

The broad enthusiasm that So-Young experienced occurred against the background of an extremely positive jobs report and an overall strong Nasdaq close.

By raising more than $179 million in its IPO, So-Young exceeded even its own expectations. When the company filed an F-1 registration statement back in April, company officials stated that they sought to raise total gross proceeds of $150 million.

So-Young plans to trade on the Nasdaq under the ticker “SY.”