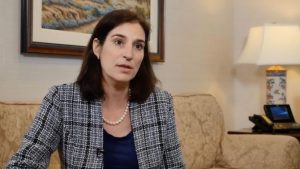 Roberta Schwartz fell in love with healthcare as a 13-year-old candy striper and she’s made that unwavering commitment a driving force for her career.

As the chief innovation officer (CIO) of Houston Methodist Hospital (HMH), she’s dedicated to affecting change in her Texas health system. Encouraging a different approach is not easy but trying to do that within a highly-regulated industry populated with well-funded stakeholders best described as plentiful and belligerent and it’s likely to be more than a little interesting. She found allies, however, and built her base on that group.

“What we found was that we were all emailing each other on various topics related to technology in healthcare and what was unavailable to us and what we were or weren’t taking advantage of,” Schwartz said of how the group’s impromptu beginnings. With her boss’ blessing, she used some money from her budget and to fund a few pilot projects.

Within a year, Schwartz and her little group – the self-proclaimed DIOPs (Digital Innovation Obsessed People) – was launching the Houston Methodist Center for Innovation. “Plans [for the center] include an innovation hub, where such vendors as Epic Systems Corp. and Apple can open pop-up stations and let clinicians play with new technologies and provide feedback,” she added.

Schwartz graduated from John Hopkins with a Master’s in health care management and from the University of Texas with a PhD in health care administration. She built her career through her work in health insurance; helping the Clinton administration make health reforms; and as a director of business development at Mount Sinai School of Medicine.

Her personal experiences shaped how she approached health care: “In 1997, I was diagnosed with breast cancer at the age of 27,” Schwartz said. “It was an unusual finding in that it was caught by an OB-GYN who sent me to a surgeon. He thought it was just a benign growth that he needed to take out and it was diagnosed, unexpectedly.”

Schwartz had no family history of breast cancer but the kind she was diagnosed with was very aggressive. She went through several surgeries and when they were unable to completely remove the cancer, she underwent a mastectomy procedure followed by six months of chemotherapy.

When asked about how that experience influenced her, she reports feeling thankful to be alive. Many young women are not diagnosed with breast cancer until it’s too late – it’s a very aggressive disease and there aren’t adequate screening procedures in place for that age group.

In terms of her career, Schwartz had this to say: “It gave me a very personal inside look at the health care system in a way that other people didn’t have – from the people interacted with in the offices and meeting other patients who all had a different way of experiencing the same trajectory and different ways of handling it.”

That’s one of the reasons why she feels that innovation can offer something important to healthcare – it can personalize the patient’s experience in a way that’s meaningful for them. Many of the trends she’s noticing in the healthcare system are the ones she observed as important for her in her own journey with cancer.

Schwartz spoke about some of the HMH’s early initiatives: a telemedicine pilot project that has been a success and an emergency room AI idea that was shelved because of risk. They have implemented a mobile text application so patients engage with virtual care, urgent care or seek out a second opinion. The Center is a space where people bring their ideas and plans are made. It’s a source of inspiration and a place for implementation.

“We’re an organization built on the pillars of success, and we constantly evolve,” Schwartz concluded. “I can’t even tell you where we’ll be in a hundred years. What I can tell you is that in a few years every type of ease of interaction that you have with Alexa and Amazon, that you will have that type of interaction with your hospital.”

“I’m thrilled to be on this journey, and we’re loving it.”