Home Biotech Move Over IT, India’s Next Big Business Is Biotech 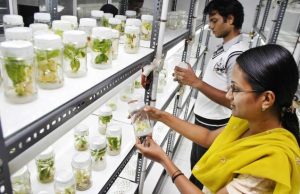 In 2000, Anu Acharya watched with wonder as the human genome was mapped in its entirety for the first time. The Human Genome Project revealed a whole new world to the young entrepreneur and she was determined to put India on the biotech map. The Western world had largely dominated genomic research up to that point but Acharya felt that could all change.

She started her first biotech business, called Ocimum Biosolutions, while still in her twenties. The genomic and bioinformatics company is based in Hyderabad where Acharya served as CEO until 2013.

“I wanted to make sure that India had its own voice heard in that,” Acharya says. To honor that commitment, she launched her second biotech start-up ten years later. Called Mapmygenome, it is a molecular-diagnostics company that is bringing the personalized medicine movement to India’s market. “Because, ultimately, when you’re making medicine precise, it has to be for specific individuals and populations rather than based on one population that has been studied.”

Acharya is just one example of India’s burgeoning biotech industry – founded on an up-swell of government optimism, an outpouring of venture capital funding and an emerging upper class interested in the perks of personalized medicine.

Up until recently, the story of India’s economy has been intertwined with the impressive performance of their information technology sector. Largely responsible for much of the country’s current status within the global market, it’s been the driving force behind their success. But like all good things, even this must eventually end.

Amit Kapoor knows that the tipping point for the IT industry is coming and it’s time for the country to concentrate efforts on developing other competencies. As honorary Chairman at India’s Institute of Competitiveness, Kapoor is an internationally recognized thought-leader on strategy and economic development for his home country.

Biotechnology, Kapoor argues, is India’s up-and-coming sector and is uniquely positioned to become the next “it” industry. “In the span of a decade beginning in 2007,” he said. “The industry has grown exponentially in size from about $2 billion to over $11 billion in terms of revenue. By 2025, it is targeted to touch $100 billion.”

Notably, India was one of the first countries to establish a government agency solely dedicated to biotechnology with its creation of the Department of Biotechnology in 1986. In addition, the country had seen the start of over a thousand biotech businesses by 2016 compared to an Australian 470. The country also enjoys a median age of 26.5 years old compared to other countries – such as the United States at 37.7 years – which provides a strong demographic advantage for sustained growth. All these factors contribute to a promising start for a thriving applied science industry.

But there a few issues that Kapoor feels could impede India’s success in this market. He points to the country’s research and development spending as being comparatively low to both established biotech economies, such as the United States and Japan, and emerging economies like China. More dedicated funding is required to build an adequate base for success in this area.

Kapoor also feels that India’s intellectual property rules are very strict – especially in regards to biotech pharmaceutical markets. He points out that this stymies innovation and discourages foreign financing. He argues that the country’s compulsory licensing which empowers the government to suspend patents in times of health emergencies means investors are likely to sidestep Indian innovations.

“The third challenge lies in the risk involved in the Valley of Death, that is, the risk of failure in the transition of innovative products and services from discovery to marketisation,” Kapoor states. “Most of the early research funding, often provided by universities or by the government, runs out before the marketisation phase, the funding for which is mostly provided by venture capitalists.”

“It becomes difficult to attract further capital between these two stages because a developing technology may seem promising, but it is often too early to validate its commercial potential.”

More work must be done to foster the right kind of environment for Indian success. Innovation on its own is not enough.