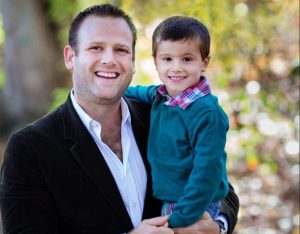 Ilan Ganot had another life before his two-year-old son was diagnosed with Duchenne muscular dystrophy. He lived in London with his wife and three children and worked at JPMorgan as an investment banker. In 2012, his son was diagnosed with the degenerative muscle disease at aged two and that was the day that changed everything.

“[Duchenne] is a disease that leaves very little room for hope, it’s a very long, steady and devastating decline,” Ganot recalled. After the diagnosis, “nothing really changed, except everything changed – even if it hadn’t actually changed yet. Your kid is just as good as [he was] the day before the diagnosis, except you know what’s coming.”

Two weeks after his son was diagnosed, Ganot walked into the office of Andreas Ponti, then co-head of Healthcare Investment Banking. “I told him, ‘I’m going to figure this out. Can you help me?’” Ganot said of the conversation. Ponti suggested attending JPMorgan Healthcare Conference, the largest investment convention in the healthcare industry, scheduled to happen January 2013 in San Francisco.

Ganot gathered up support from the leading experts studying Duchenne and a basic slide presentation about his company. After Jamie Dinon’s keynote lunch address, Ganot approached the JPMorgan Chase Chairman and told his story. “I said I believed with the right effort and capital, I could find a way to change the course of this disease. Jamie said ‘this sounds very interesting, and we’ll do what we can to help,” Ganot stated.

JPMorgan made good on their promise and led the first round of $5 million in seed funding for what became Solid BioSciences – Ganot’s hope for his son’s future and a life sciences firm dedicated to developing therapies for Duchenne. The company takes a broad view to tackling the disease – focusing on corrective therapies to address the genetic cause of Duchenne; disease modifying therapies that alleviate symptoms; understanding and measuring the disease’s progression; and assistive devices that improve quality of life for patients.

“The plan was to go and get the best expertise you could have in just one problem and figure out how to solve it,” he said. “Unlike most biotech companies that are driven by a technology, anything goes with us. There’s nothing we don’t care about if it has a chance to affect Duchenne.”

In February 2019, Solid’s stocks were hit hard when their most promising gene therapy SGT-001 failed phase I/II trials when patient levels of the much-needed protein for correcting the course of the illness petered out. The company’s stocks plunged 68 percent after the announcement, which was coupled with rising safety concerns from adverse reactions experienced by patients taking the treatment.

The company is publicly traded on Nasdaq and their valuation at IPO was $546 million. What the recent setback means for both Ganot and Solid BioSciences remains to be seen but while they might be temporarily bowed – they are not yet broken.