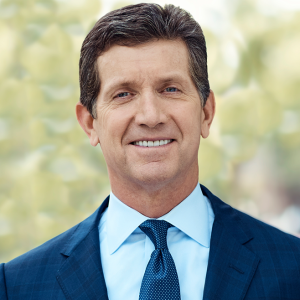 Alex Gorsky is having a bad year. As chief executive officer of pharmaceutical giant Johnson & Johnson (J&J), he’s been on the hot seat regarding an ongoing investigation into allegations the company sold asbestos-tainted baby powder. Stock prices have tumbled and he’s fielding tough questions about a law suit filed against the business claiming that their talc products caused cancer. But if anyone is up to the job – it’s the all-American soldier turned CEO.

Gorsky’s rise to pharmaceutical power was meteoric. He started his J&J career as a sales representative with Janssen in 1988 and over the next fifteen years, he advanced up through positions of progressive responsibility in sales, marketing and management. In 2001, he became president of Janssen and eventually became company group chairman for J&J’s pharmaceuticals business in Europe, the Middle East and Africa.

From there, he temporarily left Johnson & Johnson to serve as head of Novartis’ pharmaceuticals division for North America. He returned to his alma employment mater in 2008 and assumed various chairman positions until he took the company’s top spot as chief executive officer in 2012.

But Gorsky is more than a litany of leadership promotions and professional accomplishments. While his public profile casts a long shadow across the pharmaceutical industry, he is a still that curious mix of well-loved hero and much-maligned villain that makes him a part of the human condition.

Alex Gorsky joined the army at a young age and attended the U.S. Military Academy at West Point. He graduated in 1982 and served as an Army Ranger before finishing his service with the rank of captain. “It was a challenging and rewarding at the same time,” he said of his time in the armed forces. “I learned a lot about leadership, service and the important role the academy has in shaping future leaders for our country.”

In a 2012 Fortune article that probed the big-pharma’s choice in CEO, Alex Gorsky competed against Sheri McCoy, another vice chairman at J&J, to be the company’s first-in-command. It was speculated the board favored Gorsky because he was viewed as a “tough boss” while McCoy’s management style tended to be more collaborative. His big seller to the powers-that-be was his strength in execution. If nothing else is true about Gorsky, he knows how to make things happen.

Gorsky was born in Kansas City and raised in a small Midwestern town. He was the third of six children and he describes his upbringing as “typical middle-class American family”. Gorsky’s grandparents were immigrants of Croatian and Russian descent and his grandfather was in the grocery business. After moving to Fremont, Michigan with family at age twelve, he learned of a family friend who had been accepted to West Point. By grade six, he had made the decision he would attend the elite military academy and did so in 1978.

What stands out about this account is an uncommon willingness to wholeheartedly commit to a course of action and the fierce determination to follow through. Albert Gorsky, his father, may have been an important role model in this regard as he also had his own distinguished military career and successful middle class ‘rags-to-riches’ career trajectory with Gerber Products.

Gorsky also happened to blessed with other attributes that made him a leader in both his personal and professional life, including an unusual emotional acumen, easy confidence, keen intelligence and athletic ability. He is purpose-driven and this is echoed time and time again in the CEO’s frequent references to ‘mission’ and ‘credo’ in interviews and speeches throughout his life. Strength of conviction seems like a cornerstone of Gorsky’s personality.

Coming back to his work with Johnson & Johnson, it’s almost easy to see how someone with his poise and principle became one of the most powerful people in the pharmaceutical industry. Also, one of the most polarizing ones. On one hand, he was celebrated as CADCA’s Humanitarian of the Year and one of Pharma Voice’s “100 Most Inspiring People”. On the other, he was reviled for marketing J&J’s Risperdal drug to the elderly and children – despite its disturbing side effects. Incidentally, the Risperdal scandal ended up costing Johnson & Johnson almost $2 billion in fines and penalties but made them $30 billion in sales.

Perhaps Gorsky’s apparent gift is also his curse. He pursues his chosen goal with a single-minded purpose and has the skills necessary to navigate through difficult situations that would trip up other people. He is generous with his time and is kind to many around him but that is not the whole story. The other piece of the puzzle may lie with what looks like an ‘ends justifies the means’ mentality that could temporarily blind him to the realities of those left in the wake of his blaze to glory.

As tensions mount for investors and J&J’s legal battles compete with falling profits in the headlines, Gorsky may face his most daunting challenge yet. Only time will tell if he is able to win back public confidence and bolster business revenues. Odds are good that he will.